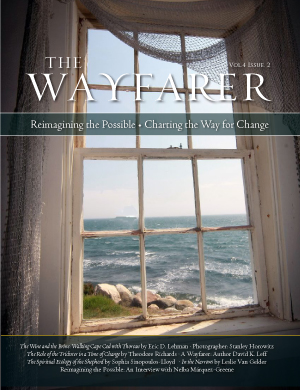 The autumn edition of The Wayfarer is now available to pre-order! Visit our Store»

Featured in this Issue:

THE CONTEMPLATIVE COLUMN: The Role of the Trickster in a Time of Change by Theodore Richards

A WAYFARER: The Sage of Collinsville: An In-depth Profile on Author David K. Leff by Eric D. Lehman

REIMAGINING THE POSSIBLE: An Interview with Nelba Márquez-Greene by Staff Writer L.M. Browning. In this interview, Editor L.M. Browning sits down with, Nelba Márquez-Greene, to talk about overcoming hate in the wake of senseless tragedy. Nelba’s beloved daughter, Ana Grace, was among those taken in the events at Sandy Hook Elementary School. In the interview, Nelba delves into her family’s love-wins philosophy, and reflects on what we can do to prevent further tragedies such as that which took place in Newtown.

Also featuring the essays: Anam Cara by Benjamin DeVos, Body Prayer by Mary Petiet, Altruistic Hiking by L.M. Browning, The Spiritual Ecology of the Shepherd by Sophia Sinopoulos-Lloyd, In the Narrows: Lascaux II and the Geography of Hope by Leslie Van Gelder, and The Wine and the Brine: Walking Cape Cod with Thoreau by Eric D. Lehman.

Hello Fellow Wayfarer! Sign up for our seasonal newsletter to receive our latest updates!

You have Successfully Subscribed!

We promise not to share your information or bombard you with spam.