Visit our bookstore to purchase an e-edition or print edition. Go to the Store»

When my eighty-five year old grandmother arrived at our house for a belated Christmas celebration, the family was surprised to see several neatly wrapped parcels tucked under her Gore-Tex winter jacket. This was unexpected because my grandmother swore off of gift giving four years ago in protest of the holiday’s materialism. She handed each grandchild an envelope containing twenty dollars to accompany a book from her personal collection to suit their respective personality. My youngest cousin was given a copy of Grimm’s Fairy Tales, while my sister, the only redhead in the family, was given The Redhead Book: A Book for and about Redheads. I took my turn peeling back the layers of scotch tape, and found beneath the wrapping Anam Cara: A Book of Celtic Wisdom. 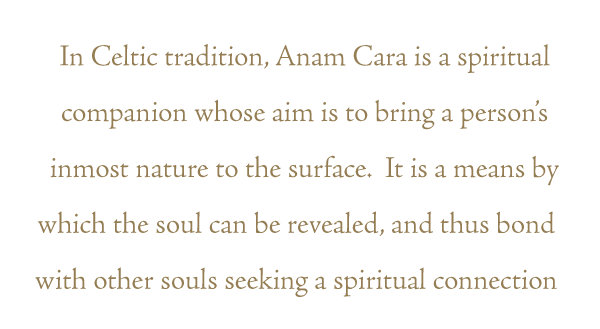 In Celtic tradition, Anam Cara is a spiritual companion whose aim is to bring a person’s inmost nature to the surface. It is a means by which the soul can be revealed, and thus bond with other souls seeking a spiritual connection. I flipped through the pages of my present as other members of the family adjourned to watch Green Bay play Seattle in CenturyLink Stadium. John O’Donohue’s writing style is enamoring, filled with gentle words that are full of meaning. As I read and thought about my own spiritual journey, I came upon a passage that read, “The stranger does not come accidentally; he brings a particular gift and illumination.” The sentence resonated with the gesture my grandmother had made to my cousins and I; specifically her act of bringing us each a particular book that appealed to our personalities. Her contributions were purposeful, and rather than adhering to the wish lists each cousin compiled, she chose to give something that could specifically bring light to the corresponding worlds we each live in.
My grandmother is a dynamically spirited woman. Despite her age and having lost her peripheral vision to a rare eye disease, she still rides the bus to work downtown by herself. She lives alone, cleans the leaves and rubbish that fall onto neighbor’s lawns, and keeps a vegetable garden in her backyard. Anam Cara says that the passionate heart never ages, which is the model that my grandmother represents in her daily routine. Her dignity is sustained by constant forward motion in a ceaseless mission to stimulate development. A couple seasons ago I was working six nights a week as a busboy at a small country club on the outskirts of Philadelphia. The hours and the patrons had degraded my livelihood to a lonely standstill, which left me exhausted and miserable. Anam Cara says that light kindles our lives, and I was standing motionless in the dark. One morning after a late shift I woke to see a voicemail on my phone from my grandmother. Assuming it was an invitation to our monthly date at Bob’s diner for breakfast, I put off listening until the afternoon, when I was standing in the employee lounge praying for strength to get through my shift. I played the message, which turned out to be an offer: to quit my job in exchange for a thousand dollars. The terms were simple but vague: in exchange for the money I was to write every day, for several hours. At twenty-one years old I had never been offered such a large sum of money, and listened a second, third, and fourth time to make sure I had heard her correctly. The next morning I returned her call, and the following week I quit my job to spend the remainder of the summer writing. When I met with my grandmother to discuss what she expected of me, she told me that I should simply do what feels right. This was no accident. My grandmother and I were always close. She was my primary caretaker when I got home from school as a child, and loves to remind me how much difficult I was back then. I thought that the money wouldn’t change our relationship, but it did. The money represented not only a gesture of good will, but also the interest that my grandmother had always shown in helping me to grow into a wise, successful man. We spent the last days and weeks of the summer together talking about the world, the change that was occurring, and how beautiful life could be.

I drove my grandmother home after our Christmas dinner and asked her why she chose Anam Cara as my gift. She responded by saying, “I thought of you when I saw it.” At the time I took her answer as a compliment, that I was wise, and thus the book made her think about me, but days later I realized that she was referring to our relationship. Anam Cara represents the bond my grandmother and I have formed through her spiritual guidance, and my returned growth, which she always wished to perpetuate. Anam Cara ends with a prayer-poem called A Blessing for Death, the last lines of which read, “May you be peaceful and happy and in the presence of those who really care for you. May your going be sheltered and your welcome assured. May your soul smile in the embrace of your Anam Cara.” My grandmother is my Anam Cara, and I repeat this prayer before bed each night in hopes that our relationship will be sustained, even when she’s gone.

Benjamin DeVos is an interdisciplinary artist from Philadelphia, studying as a creative writing student at Temple University. His work has been featured in numerous publications, most recently, Kentucky Review, and upcoming in the Inflectionist Review.