Gunilla Norris is the feature poet of the issue and has four poems featured in the edition.

It is so bright today
that the two fishermen—dark silhouettes—
seem to be standing on water. Perhaps
they are father and son. Perhaps friends
or simply strangers meeting here by chance.
Time grows large and still around them—
all concentration is on the thin lines
cast out into the deep. I have joined them.

Even from this distance I hear the whispered
whirr of their casting. The lines vibrate
like silver strings on an instrument. The light shifts.
The water rises and falls. We are waiting
on waiting. Hanging by a thread
we don’t know if we are fishing or being fished.
It is the tug that draws us, and the silence
humming in the lines as it takes us out of ourselves.

Later a cloud forms, staggering up in size
and gliding towards us. Its wide, blue shadow
shows the solid grey of the granite
the fisherman have been standing on all along.
I see them open their red lunch pails.
I unwrap my sandwich then, too. We eat,
brought back into the day by bread and our hunger.
Why do then do my eyes keep on tearing? 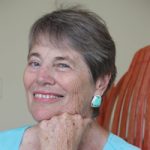 FEATURE POET • Gunilla Norris’ parents were world travelers in the Swedish diplomatic corps and so she grew up essentially in three places—Argentina, Sweden and the United States. As a child she was given a rich exposure to different languages and cultures. She received her B.A. from Sarah Lawrence College and her M.S. from Bridgeport University in the field of human development. She is a mother and a grandmother. She has been a psychotherapist in private practice for more than thirty years and has felt privileged to accompany many people on their journeys to growth and healing. Her special love has been teaching meditation and leading contemplative workshops of many kinds. As a writer Gunilla has published eleven children’s books, one book of poetry and six books on spirituality including: Being Home, Becoming Bread, Inviting Silence, A Mystic Garden, Simple Ways and the multiple award-winning title Sheltered in the Heart. Look for Gunilla’s forthcoming title Match: Bringing the Heart and Soul into Alignment November 11, 2014 from Homebound Publications.