The Role of the Trickster in a Time of Change

From Rigid Religion to Fluid Interspirituality; From Industrial Capitalism to Earth Community

The following article contains experts from, The Great Re-imagining: Spirituality in an Age of Apocalypse available through Homebound publications.

Visit our bookstore to purchase an e-edition or print edition. Go to the Store»

In this backward world
In which borders are crossed daily,
Even on city buses,
In which money is real value
And lines on a map,
So allusive on the dusty borders of Creation,
Are more real
Than the dust itself.
—Excerpt from “Borders”
(originally published in Handprints on the Womb)

It is an oft-repeated truism that, while different religions may indeed be different, they are all about the same god—“many paths to the same summit”, or something like that. But what if, one might ask, there is no single god? What if there are different summits and different truths, even contradictory ones? What if the interfaith movement is opening us up to the possibility not of a single answer but a web of paradoxical questions?

As Lewis Hyde (in his brilliant Trickster Makes This World) and other scholars have noted, there is much that has been lost in the monotheistic project. Its more dualistic expressions have turned the trickster into the devil, turned the necessary work of paradox, foolishness, and insanity into something forbidden or evil. This is a major reason why religion is so easily condemned by progressives—because the only religion we hear of seems so inflexible. Ironically, the black-and-white rejection of religion promulgated by the secular left is merely another side of this dualistic worldview.

Indeed, even when we think we’ve embraced a new paradigm through the interfaith axiom “many paths to the same summit”, the Trickster subverts that paradigm, too, revealing to us a radically pluralistic world filled with paradox.
Most fundamentally, the Trickster is a boundary crosser. Culture functions through the construction of boundaries: we learn, through the stories of our religious traditions, what is sacred and profane, appropriate and inappropriate. There are good reasons for this, of course. Civilization provides some stability and order in a chaotic and wild world. A healthy fear of the wild is not such a bad thing. But too much rejection of the wilderness can lead to a rejection of our own wildness, the source of our creativity. The Trickster dances at the edge between the clean and the dirty. He shakes us up, calling upon us to question those categories. 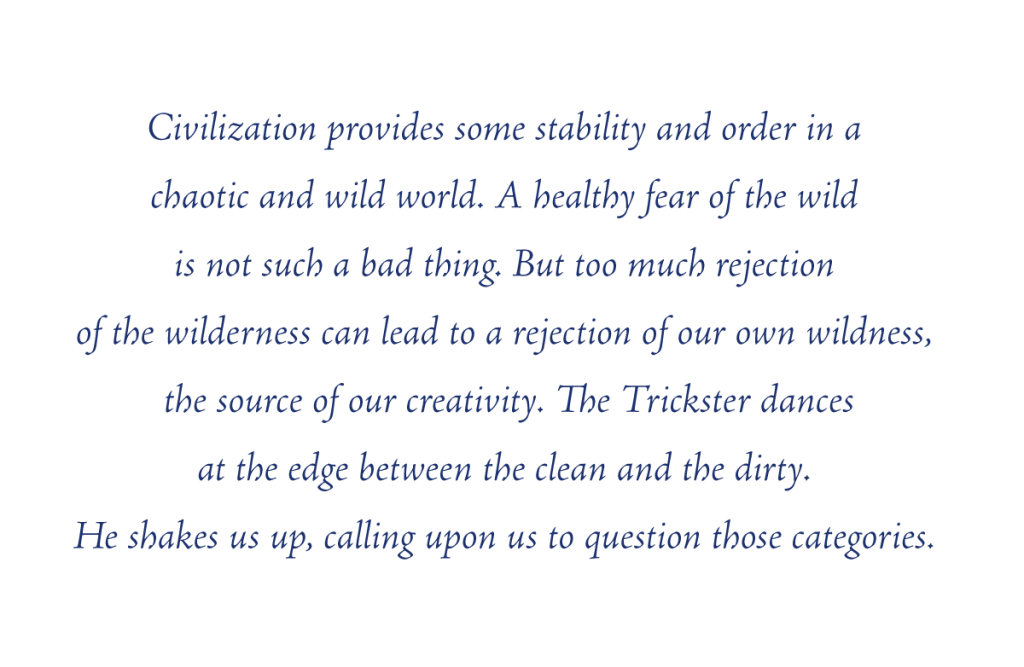 American racial categories demonstrate the absurdity of society’s categories and boundaries. Created during the early years of the trans-Atlantic slave trade in North America, American racial categories arbitrarily divided Americans into two categories—black and white. In addition to serving the purpose of justifying slavery, these categories were fundamentally religious in nature, based upon the radical dualism of Calvinism. Whiteness was associated with purity and salvation; blackness was tainted, subhuman and damned, which is why the so-called “one-drop” theory—in which one “drop” of African blood defined a person as black—persists.

The Trickster can appear to be the fool. He is wildly inappropriate. He shows us the absurdity of the inertia of our well-worn paths. Similarly, the Trickster behaves like a child. His inappropriateness is not unlike the way a child might behave. And it is the retention of our child-like qualities—called “neotony” by biologists—that give us our most human of attributes, our desire to explore and create. These are the qualities that allowed us to become human, to venture out of the forests and into the unknown savannahs and beyond.

Trickster has no place. Lacking the wisdom of other species, Raven and Coyote must figure out how to eat by their wits—just like the human. But it is this very lack of in-born wisdom that allows for the process of self-discovery, creativity, and world-building to occur.

In this way, the Trickster tale is also a Creation Story. The trickster makes and re-makes our world by shaking things up, by unbalancing things. While most of the gods provide stability, the Trickster destabilizes. Similarly, we understand from modern science that too much stability is stagnancy, even death. The Trickster engages in the dance of predator and prey, allowing for Creation to occur again and again, for the Universe to evolve and unfold.
In dualistic monotheism, the Trickster was turned into the devil. Religion, in such theologies, serves the purpose of separating saved and damned. Trickster becomes the violator of these limits. All this is not to say that the tendency of religions and cultures to make order of our world is not important and necessary. Of course it is. But the Trickster reminds us that we cannot become too attached to any order—even a good one. Even one that says “God is One.” All cultures require, paradoxically, the creative tension between cultivating a sense of belonging on one hand, and the undermining of boundaries on the other. It is not that God is not “one”—rather, God is both one and many. The absurdity of this paradox lies at the heart of the healthy approach to interfaith spirituality that not only accepts but also embraces the wild and paradoxical world in which we live.

Healthy boundaries, of course, are an important part of any culture and, indeed, any psyche. A culture whose boundaries are too rigid is fascist; a culture without any order or boundaries is one in which no one knows her place. As Yeats puts it:

Turning and turning in the widening gyre
The falcon cannot hear the falconer;
Things fall apart; the centre cannot hold;
Mere anarchy is loosed upon the world,
The blood-dimmed tide is loosed, and everywhere
The ceremony of innocence is drowned;
The best lack all conviction, while the worst
Are full of passionate intensity.

And we’ve all known people so rigid they cannot function outside of their comfort zone, just as we know those without healthy boundaries—and the neurotic and dysfunctional behavior that results. It is a balance between cosmos and chaos that the trickster navigates.

We find ourselves at another edge. An apocalyptic moment. Adherence to the values of our culture lead us on the path of destruction. To be clear, I refer to the culture of global capitalism that dominates the planet at this time. This is a culture that treats the Earth as a machine and the individuals as isolated consumers in competition with one another. A boundary must be crossed. It seems simple to many. We possess the scientific knowledge and the technological skills to overcome the ecological crisis. But somehow we do not change. For we have not yet exposed the insanity of our current system. This is what Dr. Martin Luther King, Jr. was trying to tell us when he called on us to be “creatively maladjusted”. We should appear to be crazy, at times, in the face of an unjust, insane system. This is the work of the artist, the work of the rebel, and the work of the Trickster, breaking down barriers and shattering cosmos and cosmology. Such work can be dangerous, even foolhardy. But at this moment, it is also necessary.

Theodore Richards is a novelist, philosopher, and educator, and is the director and founder of The Chicago Wisdom Project. He is the author of several books, most recently the novel The Conversions, and the recipient of numerous literary awards. He lives on the south side of Chicago with his wife and daughters. Visit www.theodorerichards.com