After spending an interim ministry year ‘banished’ to Las Vegas, with its limited natural resources, I deliberately chose an ecologically aware and environmentally active congregation in Vermont for my next interim ministry experience. I wanted to learn to live as simply and as sustainably as possible. “Simplify,” Thoreau urged a century and a half ago; okay, I’d try, while living in the rural village of Lyme, New Hampshire, twelve miles north and east across the Connecticut River from the church’s office in Norwich, Vermont.

Renting what I came to call my Thoreau House, a two-story cottage that sat on a tiny lane just outside the village, it didn’t take long to realize how complicated the simplified life can be. I’d come to expect and always taken for granted such essentials as running water, electricity, indoor plumbing, and instant heat….none of which Thoreau had, of course.

While this was about as ‘simply’ as I could or cared to get, living in rural New England proved to be a learning curve.

Water came from a deep well; I held my breath that it wouldn’t run dry in the drought, as had wells of some of the neighboring congregants; several didn’t even have water to bring for the annual in-gathering church water ceremony.

The plumbing facilities centered on a septic system; when it ‘went out’ at the end of my first month, for a 24 hour period I ran across the lane to use a neighbor’s bathroom and shower. From then on, I gave thanks for each day the plumbing worked.

The village green/town square area consisted of the archetypal white church (Congregational) at one end, and a small branch of a bank at the other. In between was the overly priced grocery store where few people shopped except for emergencies; rarely did anyone break down and run into the Lyme Country Store where a single banana could cost $1.29!

Instead, I’d shop weekly down at the Dartmouth Co-op, and if I forgot something, I learned to do without, rather than drive the twenty miles round trip to fetch what ever it was.

Also on the village green was the Hardware Store. This was the neighborhood hang out, the place you’d meet up with everyone sooner or later. For not only was there a grill at the front of the store cooking up and serving greasy breakfasts and lunches, (the smell alone compelled you to stop and appease your stomach’s growling), the local post office was located in the rear of the store.

Most folks had P.O. boxes there, and even those of us with mail boxes on the street had to come here to retrieve our mail once the snow banks iced solid and the mail lady couldn’t get her car close enough to put mail into our street boxes.

It was this hardware store that carried all the essentials for living the rural life, including the blaze orange vest strongly suggested for hiking safely during hunting season.

The owner even spent a block of time advising me on the proper running of a wood stove: how to burn it hot enough to prevent creosote buildup and then check the chimney with a hand mirror (I used the one left to me by my maternal grandmother!) to make sure it was clean and therefore safe.

And then there was the matter of the town dump just beyond the village green. Trash pick up was non-existent. The good news is there was no beeping truck breaking the early morning silence; the not so great news was that you had to haul all your own stuff to the ‘transfer station.’ And it was only open one morning a week, from 8:30 through 11AM. 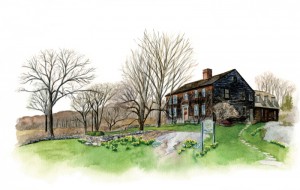 In Lyme, that turned out to be on Sundays. While this would work out just fine for everyone heading to services at the nearby Congregational Church, the church I was serving was a twenty-minute drive down the other side of the river.

And so there I sat, at 8:20 every Sunday morning, in the slowly growing line in front of the dump, waiting for the truck to arrive. Only then would the gate be opened.

The truck was for receiving the ‘wet’ stuff: garbage, mainly. And make no mistake: the driver monitored what you were putting into the back of his vehicle.

Tromping around through the dirt become snow become mud in my church lady shoes each Sunday, greeting the more appropriately dressed townsfolk (sweats and flannel shirts, down parkers and boots) became the adventure of the week.

And I grew increasingly cross at receiving unsolicited mail that I would have to sort and store for a week and then lug to the dump in one of the several bags of stuff to be emptied out and then put their appropriate container.

I was appalled at how much stuff I accumulated and then discarded each week: no wonder Al Gore could claim in his book/tape Earth in the Balance that our throw away society was in danger of suffocating in our own waste!

I learned to keep the week’s worth of garbage in the bottom of the refrigerator so it wouldn’t smell up the house, and/or attract critters. For living out in the country meant interfacing with a variety of animals, from ants to mice to skunks to bears.

The first time I looked up and saw a sign posted on a tree beside the trail to Pout Pond, I thought I was seeing things:

“Warning: Collared bears in area. Please do not harm them; they are part of a National Geographic study.”

Apparently, a long time resident of the village had long ago begun raising orphaned black bear cubs in the area, then returning them to the wild, and their presence had become a way of life here, though through-hikers on the Appalachian Trail were occasionally surprised when they were relieved of their back packs by Ben’s curious bears.

Being there made me aware of how humans drawing back their presence empowered other species to revive and thrive.

Hardwood trees were reclaiming the cleared farmlands that had been deserted during the migration west once the flatter and more fertile Ohio River Valley became accessible by train. One could still come across crumbling stone walls on a hike out into what otherwise appeared to be nowhere-in-particular.

What we gave up in conveniences (such as getting NBC on our televisions; its omission by the satellite company caused a run on rabbit ears at the hardware store when it was time for the Winter Olympics) was well compensated by a sense of being in tune with the seasons.

For instance, in the autumn, canoeing across a pond, then hiking to another pond’s marshy area to gather cranberries amid the fresh bear scat, being mindful to leave what we won’t use so the bears can continue to bulk up for the winter, I felt the sunshine on my shoulders and knew that it was stored up for my metabolism in the very cranberries I’d carry home and make into sauce to take to the family Thanksgiving Dinner.

Plus, you could hear the bears hooting in the woods when you went out to check the spigots on the maple trees in the spring, and know it was time to take down the bird feeders so the bears coming out of hibernation wouldn’t make a nuisance of themselves rather than forage for food in the woods.
Between the glory of the maple leaves in autumn and the running of the sap in the spring, there was skating on the town pond in winter and swimming in it in summer, the local turkey farm that became eerily silent just before Thanksgiving, a nearby Christmas tree farm where I bought a tiny tree rather than buying and planting a live tree for the season as I had always done…but was redundant here.

Even with a short growing season there were wonderful fresh veggies….fruit that could be eaten right off the trees because they had not been sprayed with pesticides, wild blueberries and raspberries to be gathered during each day’s hike for the next morning’s cereal…I carried along a little container that would hold just enough. And at the end of the summer, small boxes of cherry tomatoes were set out on tables at the end of one driveway just for the taking…FREE!

When my small granddaughters came for a week, we found a field of four-leaf clovers near the playground we frequented, and brought one home each day for our ‘saying thank you’ ceremony at bedtime. By then I had integrated the wisdom of the most frequently seen bumper sticker: Embrace Nature. And I felt deeply embraced BY nature.

But I‘d also found that the closer you live to nature, the more you realize the damage being done through human mindlessness. For instance, the glory of New England is its fall colors, yet the maples are dying from acid rain carried on the wind from coal burning power plants in Ohio. And the earlier springs from global warming are disrupting the sugaring cycle that needs cold nights to draw the sap back down into the roots at the end of each warm spring day.

Everything was clearly interconnected in large and small ways: it was utterly overwhelming to be so intensely aware of ones every action, so that even opening a packet of peanut butter crackers became a wanton act of wasting packaging.

The archetypal Yankee poet Robert Frost wrote of the difference between making new and making do….and rural New Englanders have always seemed to know in their bones how to make do out here, where the true state flag is blue tarp.

But making do meant being mindful! And that made for a complicated life!! It also called forth a whole new way of living.

For Gail Collins-Ranadive, writing has always been the best way to stay centered and make sense of life’s experiences: from being a nurse to earning a private pilot’s license; from visiting with in-laws in India to spending time with a friend living in Nicaragua before and after the revolution there; from earning a degree in Peace Studies as a military spouse to lobbying for federal funding of the U.S. Institute of Peace; from creating a women’s writing workshop as part of an M.F.A. in Creative Writing to winning a grant to publish it in book form; from earning an M.Div. to doing ordained interim ministries all across the continent; from growing up the oldest of eight to mothering two daughters to becoming a grandmother of four granddaughters and one grandson. An Easterner by birth, she currently spends winters at her home in Las Vegas, summers in her partner’s home in Denver….always writing, writing, writing. Her latest book, Chewing Sand: An Eco-spiritual Taste of the Mojave Desert is now available.