The Inner-frontier: An Exploration of Verse, Psyche & Self with David Whyte 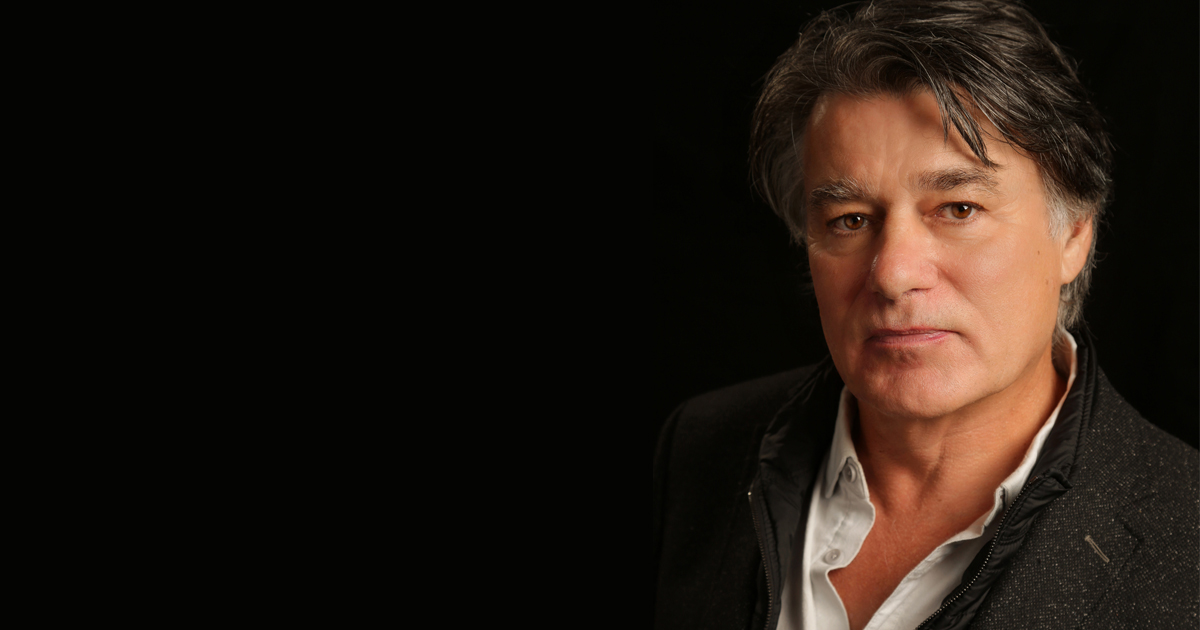 An Exploration of Verse, Psyche & Self

A Conversation with David Whyte by Editor-in-chief L.M. Browning

Poet David Whyte grew up with a strong, imaginative influence from his Irish mother and found his true self while walking among the hills and valleys of his homeland. The author of eight books of poetry and four books of prose, David Whyte holds a degree in Marine Zoology, honorary degrees from Neumann College and Royal Roads University, and has traveled extensively, including living and working as a naturalist guide in the Galapagos Islands and leading anthropological and natural history expeditions in the Andes, Amazon and Himalaya. He brings this wealth of experience to his poetry, lectures and workshops.

His life as a poet has created a readership and listenership in three normally mutually exclusive areas: the literate world of readings that most poets inhabit, the psychological and theological worlds of philosophical enquiry and the world of vocation, work and organizational leadership.

An Associate Fellow at Said Business School at the University of Oxford, he is one of the few poets to take his perspectives on creativity into the field of organizational development, where he works with many European, American and international companies.**

Leslie: What was your first encounter with poetry?

David: The first image I have in my mind and memory is of the silhouette of my mother, reciting to me in the Irish language, while sitting, at the foot of my bed against the light of a door always left ajar because there was no working light in my room. I felt in the gravitational pull of her voice, both completely present and in the presence of, while being introduced to a vast inherited world of which I knew I was a part.

Leslie:  When did you first know it was your path to be a poet?

David: There were the first bodily intuitions, which had nothing to do with vocation, but with natural attraction, followed by a more serious confrontation of the inheritance of poetry. I happened to come across a large format copy of the Ancient Mariner by Coleridge, (One with the famous Dorée engravings) when I was nine years old. I remember having the book open on the kitchen floor while my mother worked around me and having an experience of both sheer terror and absolute fascination at one and the same time. Then at twelve, in the local library, I pulled down by my stretched fingertips, a collaboration of Thom Gunn and Ted Hughes, the reading of which felt literarily like being plucked up from the ground by a passing Hawk. That was the moment poetry really got its claws into me, an abduction, a kind of kidnapping of a growing identity that changed me forever. Though I stayed very serious through my years as a naturalist and world traveler, Poetry as a vocational path opened up to my imagination as a possibility only in my late twenties and then more seriously in my early thirties, when I first began to work with memorized poetry, my own and others, before live audiences.

Leslie: You have said that, throughout your youth, you grew up with an imaginative influence from your Irish mother. In images and ideas what did she pass on to you at such a young age?

David: The sense of a greater inheritance, another always present but unspoken context, a sense also of deep compassion for others and the struggle involved, of living even the most quotidien life. A lively, untrammeled sense of language, with laughter never very far away at the absurdity of it all.

Leslie: Would you say she was your strongest influence?

David: In one sense. In another I have had so many good influences in my life, from Latin Teachers to sea Captains! And then all those in the long lineage of poetry who have spoken to me and taught me, most especially William Wordsworth.

Leslie: You’ve traveled extensively . . . the Galapagos Islands, the Andes, Amazon, and Himalaya to name a few. What places have imprinted themselves the deepest and how has that connection revealed itself in your work?

David: Though I have been many, many places. The places most deeply imprinted are the places involved in my direct inheritance: the Yorkshire Moors and Dales and the Cumbrian Mountains of the North of England and in Ireland, the Atlantic shores of that land.

David: Not fully in the space and time we have here! But essentially, in Conversational Leadership I am working with the timeless thresholds human beings have had to cross, whether they see themselves as leaders or no, in deepening any conversation. My next prose book looks at seven of these ancient and necessary ways of making the invitation that is necessary to any Leadership conversation.

Leslie: In the work at present, we see upheaval and more and more we see leadership being replaced by self-interest. Could you see the philosophies of “Conversational Leadership” addressing these escalating challenges? In our last issue, we spoke with your fellow poet and colleague Krista Tippett regarding poet’s place in the husbandry of the soul throughout heavy times, such as those we currently face as a global village. Would you agree that poetry speaks to and nourishes some part of us that isn’t otherwise reached by religion and spirituality?

David: The larger context, the perspective beyond what you have come to only think is a self, is what I address every day, through poetry, whether I am in Paris, France, or Paris, Texas, working with leaders and managers, literary hipsters, academics,  or the dedicated religious, of all linguistic backgrounds, religious philosophies and cultures. Poetry has the great ability to address the deeper paths of the human psyche without setting off any inherited religious allergies… As I often say, poetry is language against which we have no defenses. 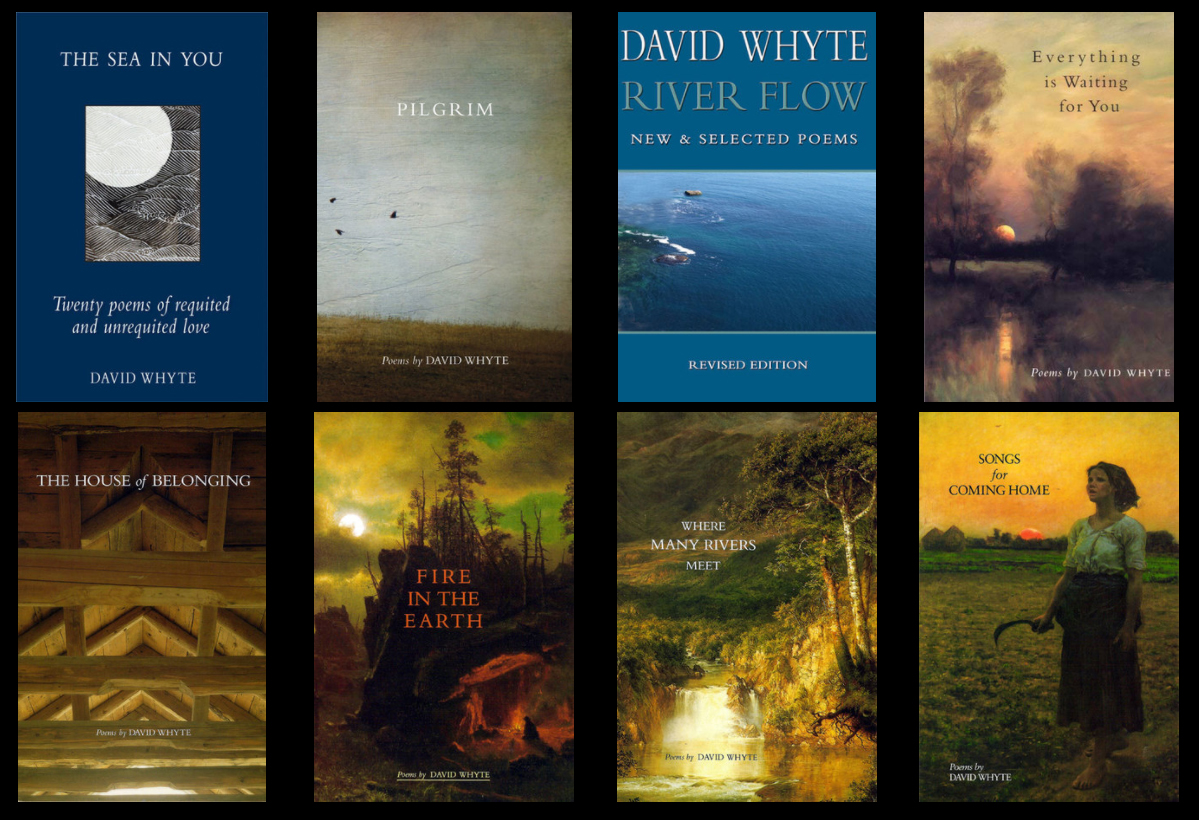 Leslie: Indeed. Especially your work. Your poetry is layered with revelation as well as description. This is part of your signature as a poet. While there are numerous selections and offerings that come to mind when I think of your work, I will end with a selection of yours, in the poem, “Sweet Darkness” you write:

When your eyes are tired

the world is tired also.

When your vision has gone,

no part of the world can find you.

Time to go into the dark

where the night has eyes

to recognize its own.

Can you tell us from where in your psyche this revelation sprung and what it speaks to?

David: “Sweet Darkness” was written out of that very physical and almost breathless giving away, most human beings feel when they must let go of what seems most precious to them, not knowing how or when it will return, in what form or in what voice—that taking away of the light we experience walking through divorce or separation, through bereavement or through simply not recognizing the person looking back at us in the mirror. “Sweet Darkness” was begun in the early and darkest hours of the morning, in a kind of defiant praise of this difficult time of not knowing, a letter of invitation to embrace the beauty of the night and of the foundational human experience of not being able to see, as actually another horizon, and perhaps the only horizon out of which a truly new revelation can emerge. The last line cuts both ways of course, we ourselves have often helped to make everything and everyone around us, far too small, by our lack of faith in not knowing, by all the ways we are not holding the conversation with what as yet cannot be fully articulated. The essential work of poetry I might add!

Leslie: In closing, can you tell us what you’re working on now?

David: In the world of works, am just finishing up a book of poetry ‘The Bell and Blackbird” that I am very intrigued to recite from and work with for the next few years of my existence. When that is done and out in the world in mid-April I will return to my prose book on ‘The Conversational Nature of Reality.’ Titled A Timeless Way: Seven Steps for Deepening any Conversation.

On the interior edge, walking around in that body addressed only from the outside as David Whyte, I am practicing the ancient and difficult art of living more at the frontier between what I think is me and what I think is the world. It’s the frontier that the writer writes at to write, the painter paints at to paint, and in the ultimate act of courage and bravery, the place from which to live, from the outside, what only looks like a most average life…. 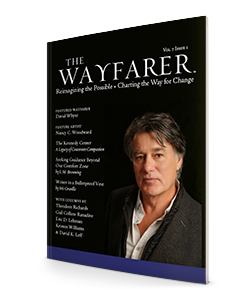 This is a selection from The Wayfarer’s spring 2018 issue.

Order the entire issue in either print or e-edition in our store.

The Wayfarer is a biannual magazine released in print and e-edition every spring and autumn. We publish a high-quality journal of literature and art that inspires and points the way for visionary-yet-practical change. By our definition, a “wayfarer” is a wanderer whose ability to re-imagine the possible provides the compass bearings for those on their way. The Wayfarer’s mission is to chart the way for change by building and empowering a community of contemplative voices. We seek to release a publication that builds and empowers a community of contemplative voices and serves as an agent for cultural transformation. 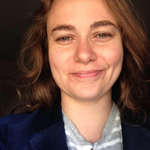 L.M. Browning is a publisher, TEDx Talker, and award-winning author of eleven books. Balancing her passion for writing with her love of learning, Browning sits on the Board of Directors for the Independent Book Publishers’ Association, she is a graduate of the University of London, and a Fellow with the International League of Conservation Writers. She divides her time between her home along Connecticut’s shore and Boston where she is earning an L.B.A. in Creative Writing and Journalism at Harvard University’s Extension School. Look for Leslie’s next book, To Lose the Madness: Field Notes on Trauma, Loss and Radical Authenticity. Visit her at www.lmbrowning.com